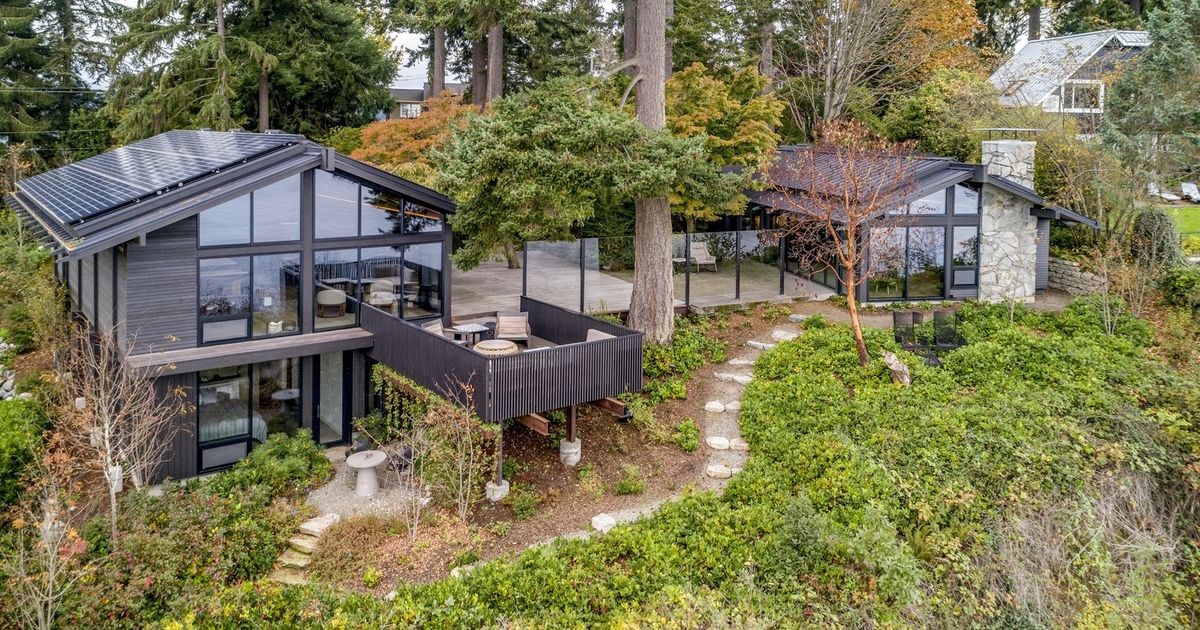 WE ARE NOT going to dwell long on the “before” of this story. We could — this 1968 Bainbridge Island beauty stood sturdily for half a century as a classic paragon of design, craftsmanship and the Pacific Northwest itself — but it is the “after” that weaves inspiring threads of connection, comfort, nature, sustainability and home into a harmonious dwelling unlike any other on the planet.

This matchless “after” is called Loom House, the first renovated home anywhere to achieve full Living Building Challenge (LBC) certification, which means it has met seven supremely rigorous foundational standards — “petals”— of sustainability: Place, Energy, Water, Health & Happiness, Materials, Equity and Beauty. (Heron Hall, also on Bainbridge — clearly an island of forward-thinking building and living — is LBC-certified, too, but it was built from scratch.)

Just as significantly, only Loom House is inhabited by Karen Hust and Todd Vogel, who bought this “well-loved and -cared for, but not updated” home (originally designed by Northwest architect Hal Moldstad), envisioned conscientiously renovating it for energy-efficiency — and in the happy aftermath set a stratospheric standard of green living that has enriched their daily existence, and could (should) inspire a global renovation revolution.

“When we knew we were going to do a renovation, we wanted it to be as green as possible. But we didn’t know what was possible,” Hust says. “We realized there were lots of standards out there, and we thought, ‘Well, standards are cool, because if you meet one, people will hear about it, and things will be passed along, hopefully. And then we learned about the LBC … and although it seemed like a hard bar, we thought, ‘This will be so useful and effective as a tool if we go for it.’ We were excited from the get-go.“

That was huge. (But their stunningly groundbreaking home is not: 3,200 square feet split between a southern main house and a northern guest and office space, connected by an expansive, wow-would-you-look-at-that-view outdoor deck.)

“My No. 1 secret for the success of a Living Building is owner commitment. That’s it,” says architect Chris Hellstern, the LBC services director at The Miller Hull Partnership (the company behind Seattle’s LBC-certified Bullitt Center). “I think this project got certified because the owners were really invested. I don’t know that you could make it through this process with people who had been ‘talked into it.’ ”

As Hust and Vogel eagerly deepened their LBC understanding and their connection to the house and the essential nature around it (all the while documenting the historic project, and the depth of their commitment, on their awesome blog), Hellstern and the team that pulled together to pull this off — Clark Construction Inc., interior designer Charlie Hellstern (who is married to Chris), Anne James Landscape Architecture, plus a healthy handful of engineers and consultants — got to work cultivating petals.

The original structure (all wood, no Sheetrock) “showed in good and bad ways,” says Justin Ansley of Clark Construction — high-quality lumber, hand-built craftsmanship, overall architectural “bones”: good. Oddly small rooms, spots of asbestos, an overabundance of bunk beds but no true entrance: not as much. “It was a real challenge to figure out how to infill and create a tight, modern, energy-efficient building, but because of that, the superstructure is still there, and that’s a lot of the look that everyone loves so much.”

As those not-so-beloved dividing walls came down, Vogel remembers, Ansley pulled out a piece of lumber and said, ” ‘This is first-growth. I couldn’t buy a piece of lumber this strong.’ And he then would turn around and find a place to use it in the wall. One, that is great for reuse, and two, it helps us understand what’s going on behind the walls and gives us connection to the love and care that folks put into constructing this place.”

In itself, construction through renovating, rather than razing and rebuilding, is like gardening with starter plants instead of seeds: You get a good head-start toward something beautifully green. “There’s obviously an embodied carbon benefit to that, and Todd and Karen have reaped that,” says Chris Hellstern. “We certainly see that as we reuse materials, we’re not having to make new products that are plastic. Also less chemicals of concern. So overall, from a materials and global-warming-reduction standpoint, it can be really environmentally beneficial.”

As Loom House blossomed into a showcase of regenerative design — with new insulation; just-right ventilation, lighting and climate control; triple-paned windows; an underground cistern that captures enough water for year-round self-sufficiency; a new carport for electric-vehicle charging; Red List chemical-free furniture, furnishings and building materials; 16 kWh of photovoltaic panels; a backup battery system rather than a disturbing-the-peace generator; life-affirming nature all around — the benefits multiplied. Even beyond all the awards and accolades Loom House has garnered.

Financially and environmentally, Hust and Vogel happily collect checks from the power company at the end of the year. “It’s great to feel like we’re able to harvest enough energy that we can be part of the community but not necessarily taking any more than we need,” says Hust. (Vogel reports their largest utility bill is for their cellphone.)

Spiritually and environmentally, Hust says, “The proportions of the space and the beautiful furniture certainly help with low stress levels. It has spaces that work for us, and the systems work so well, that it becomes a subconscious pleasure to be here.” Adds Vogel: “Ambiently, we’re really comfortable, in terms of air temperature and that kind of thing. But also, we have a connection to nature with our house, and we have already seen that there’s a place to go explore here, and going out into that space and doing that exploration in itself lowers stress.”

Always, it all comes back to nature. And this harmonious home. And its own crucial “after” effects.


Sandy Deneau Dunham
writes about architecture and design for Pacific NW and is associate editor of the magazine. Reach her at [email protected]